Starting as early as first grade, Common Core State Standards state that students should be able to “describe characters, settings, and major events in a story, using key details.” (RL.1.3) You can evaluate the ability of your young learners to recall and retell key details by having them complete a character traits cluster diagram in Wixie. 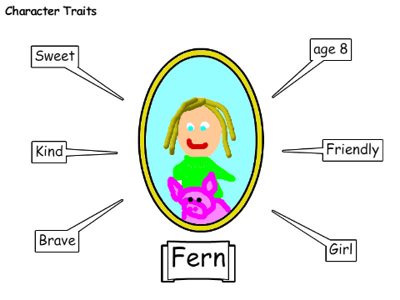 Wixie makes implementing this process in the classroom easy with a character traits template that students can open on their own or that you can assign to your students.

The Wixie character traits cluster includes seven text boxes to push students to think of more than just one or two single words or short descriptive phrases as they recall and retell details. There is also space for them to add clip art images or use the paint tools to create a visual representation of the main characters physical traits.

Have students open the Templates folder in the list on the left and then the General folder.

Students simply click the Character Traits template to open it. 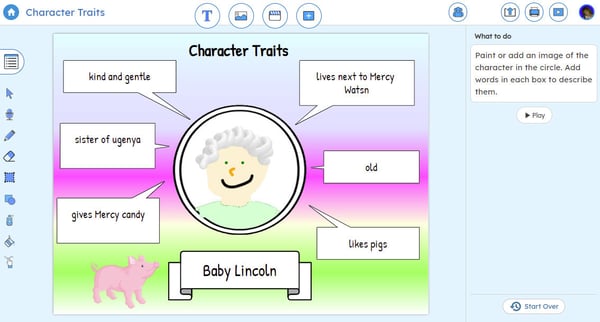 Use the Character Traits template for Informational Text

We most often link character trait clusters with stories and literature, but you can also ask students to create them to recall and retell what they have learned from informational text.

Students can create character trait clusters to share the traits of a good digital citizen or information they have learned about a person from history, such as George Washington. If your students are studying animals, have them follow the same process to add words and pictures that retell factual details they have learned from their reading.

Use the Character Traits template for Pre-writing

In addition to collecting descriptive details of what is known, cluster diagrams are often used for brainstorming and ideation. Both of these are great reasons for using a character traits cluster during pre-writing. A blank page is a scary place to start for many emerging writers. Having a cluster diagram filled with information and ideas can make starting that first sentence, or second or third, much easier.

Get Creative with Character Trait Clusters

Cluster diagrams can look a lot of ways. Use the Search field at the top to find additional clusters styles.

The Mother's Bloom makes for a beautiful Mother's Day project. If your devices have cameras, be sure to use the camera in the Image dialog to capture their image. You can even have them record a special message and share the project URL as an electronic Mother’s Day card. 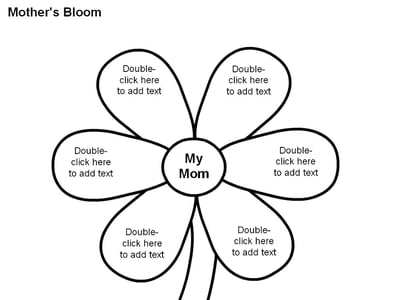 Since most students will use words like kind, helpful, and loving to describe their mothers, this is a great project to help students move from recalling only physical characteristics to describing the personality and behavior of the characters they are reading about.

We can't wait to see your ideas for using character trait clusters with your primary learners. Please include a #Wixie hashtag so we can see what you and your students create!