A major focus in kindergarten, and often into first grade, is developing an understanding of whole number relationships. Comparing numbers (greater than, less than, and equal to) is at the core of this understanding. Wixie's Comparing Numbers template is designed as an assessment of initial comparing knowledge.

Editor's Note: This blog is part of a series of posts from former math specialist Scott Loomis on the real world math templates he has created for Wixie and how you can use and modify them for your own awesome performance tasks. You can read the backstory on his experience and expertise below.

The Compare Numbers activity asks students to arrange numbers from least to greatest (first two tasks) and then greatest to least (final two tasks). The numbers involved are between 1-10. 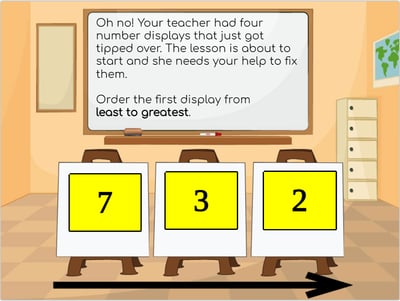 As always, Wixie makes it easy to open and customize existing templates. We encourage you to customize the template to modify the existing problems and activities to meet your specific computation expectations. Although the template is envisioned for initial comparing number understanding, teachers may opt to modify the text objects to use numbers between 1-100 which correspond with grade level expectations.

Add to your Wixie account: Select this link for Compare Numbers. When the template opens in a new tab, use the Log in button in the upper right to log into your account. Go to the File menu and choose Make a Copy to add this template to the My Projects folder in your personal account.

Virginia SOL - Mathematics - Number and Number Sense
K.2.b compare and order sets from least to greatest and greatest to least.

Texas TEKS - Mathematics - Number and Operations
K.2 The student applies mathematical process standards to understand how to represent and compare whole numbers, the relative position and magnitude of whole numbers, and relationships within the numeration system. The student is expected to:
(G) compare sets of objects up to at least 20 in each set using comparative language.

Students: The completion of this assessment is fairly straightforward as students simply click and drag objects to arrange them in order, first, from least to greatest and then greatest to least. A quick review of strategies students can use to move things around would likely be of value.

Teachers: Note that each text box has been un-Scaled and Protected. These are both Properties settings from the Edit menu. Teachers will need to un-Protect to make changes.

Making your own custom templates in Wixie

Wixie is a powerful canvas for elementary math learning. Wixie makes it easy to combine typed and drawn numbers, with math manipulatives and audio explanations of mathematical thinking.

With limited classroom time, you can create or customize Wixie templates to guide student math practice and independent work to meet specific math goals in your classroom.